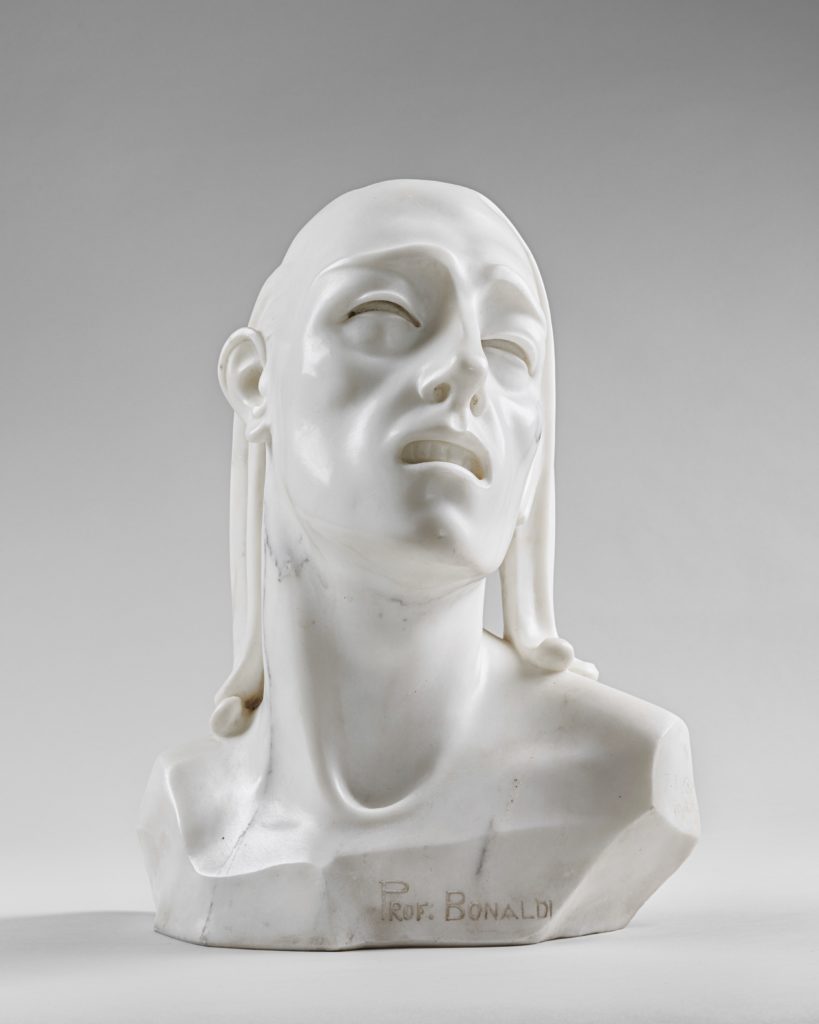 This mysterious marble is replete with dramatic intensity. Turned towards the sky, the face of the man represented is contorted by fear and tension. His eyes are suggested merely by two fine slots, that underline these emotions and evoke the tragic mask of classical theatre. His horizontal mouth, exposing one row of teeth, confirm this dramatic tension. It could be read as suggestive of a desperate cry, as attributed by Virgil to the priest Laocoön, while defending himself against the two monstrous snakes. Or quite the opposite, a suppressed cry, as interpreted by Johann Joachim Winckelmann and Gotthold Ephraim Lessing in their respective study of the antique.

The back of the bust has been left uncarved by the sculptor, as if intended as a high relief. The treatment of the face, with its smoothed and simplified features, recalls Italian sculpture as it was taught at the Accademia di belle arti di Carrara by sculptors such as Carlo Fontana, around the beginning of twentieth century.

The signature “Prof. Bonaldi” could be attributed to the Italian sculptor Almo Bonaldi. In 1924, his name is mentioned as the owner of a sculpture studio specialized in marble in the city of Carrara[1]. In 1930, he participated to the Premio Reale-Premio Dervillé at the Accademia di belle arti di Carrara, with a sculpture representing a young centaur[2]. This official sculpture contest was organized by the academy in collaboration with the marble industrialists of the region, which might explain why Almo Bonaldi participated. Later on, his presence in Toulon could be linked to the founding of an enterprise of marble masons, under the name Bonaldi, around 1930 in the region. Still active today, the company seems to have furnished stones for some of the public fountains in the center of Toulon. In the context of this migration, Almo Bonaldi might have continued his artistic practice and teaching, as his signature suggests, in the south of France.