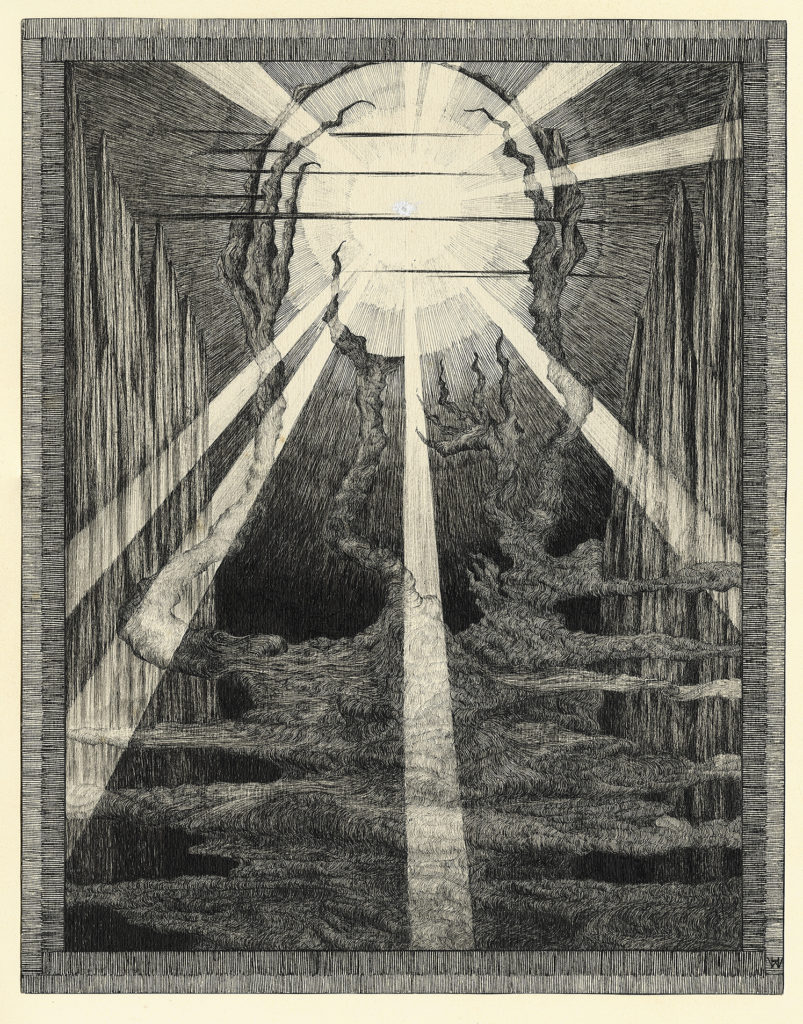 Hermann Wöhler work is one the best rediscoveries made from the German art of the 1920’s. Die Sonne is part of the virtual series Der Paraklet. Sieben Bilder aus den Tagen des Retters un zum Gedächtnis an den frühe Heimgegangenen [The Paraclete. Seven images from the Days of the Saviours to the memory of the early deceased]. Influences were thereby the main protagonists of the 16th c. Danube School such as Albrecht Altdorfer and Wolf Huber, together with 19th c. artists, like Philipp Otto Runge and its ornamental symbolism, and mainly Hugo Hoeppener, known as Fidus, whose work combined mysticism, eroticism and allegory, and who had been Wöhler’s teacher. The present work displays an impressive strength in describing the relentless fight between light and darkness expressed here as the unsuccessful attempts of the claws of the shadows to quench the light of the sun that remains inextinguishable.

The young Hermann Wöhler started studying in his native Hanover, and then at the Kunstgewerbeakademie in Dresden and at the Staatlichen Kunsthochschule in Berlin, where he was named in 1923 Akademischer Zeichenlehrer, i.e. drawing teacher. An intellectual man, Wöhler was well-versed in German art, history, philosophy and classical literature, as well as in Oriental and Eastern religions, Gnosticism and the Kabbalah. From the start of his career, Wöhler did indeed take his subjects from the German mythology and literature, but transforming then in striking works characterized by bizarre imagery and imaginative compositions.

Wöhler worked in black and white, producing elaborate large-scale drawings in pen and ink. In 1918 his first work was a portfolio of seven large ink compositions, plus a title page, under the title Zwielicht: Sieben Sinnbilder / Erste Geschichte des Erwachenden Schicksals vor dem Licht [Twilight: Seven Symbols / The First History of the Awakening Fate of Light], and he then pursued in creating series of sizeable ink drawings throughout the 1920’s. The so-called series were often not a precise program at the beginning of the process, and most of them have not been kept together, which make somehow difficult to size its meaning.

These fantastic drawings are very rare to find. From 1934 until his death in 1961, Wöhler served as a Professor of art at the Pädagogischen Kunsthochschule in Hanover. His long career as an art teacher largely precluded him from selling or exhibiting his own work, and his oeuvre was completely unknown to the public in his lifetime. Later in his career, Wöhler turned towards fairy-tale themes, producing tempera paintings of such subjects, for the most part executed in the 1940’s, as a reaction to the horrors of war. It was not until 1987, that the first exhibition of Wöhler’s work was mounted, at the Historischen Museum in Hanover. In January 2015, the Deutsches Märchen und Wesersagenmuseum held an exhibition of sixty paintings, commemorating the acquisition by the museum, from his heirs, of over two hundred works.