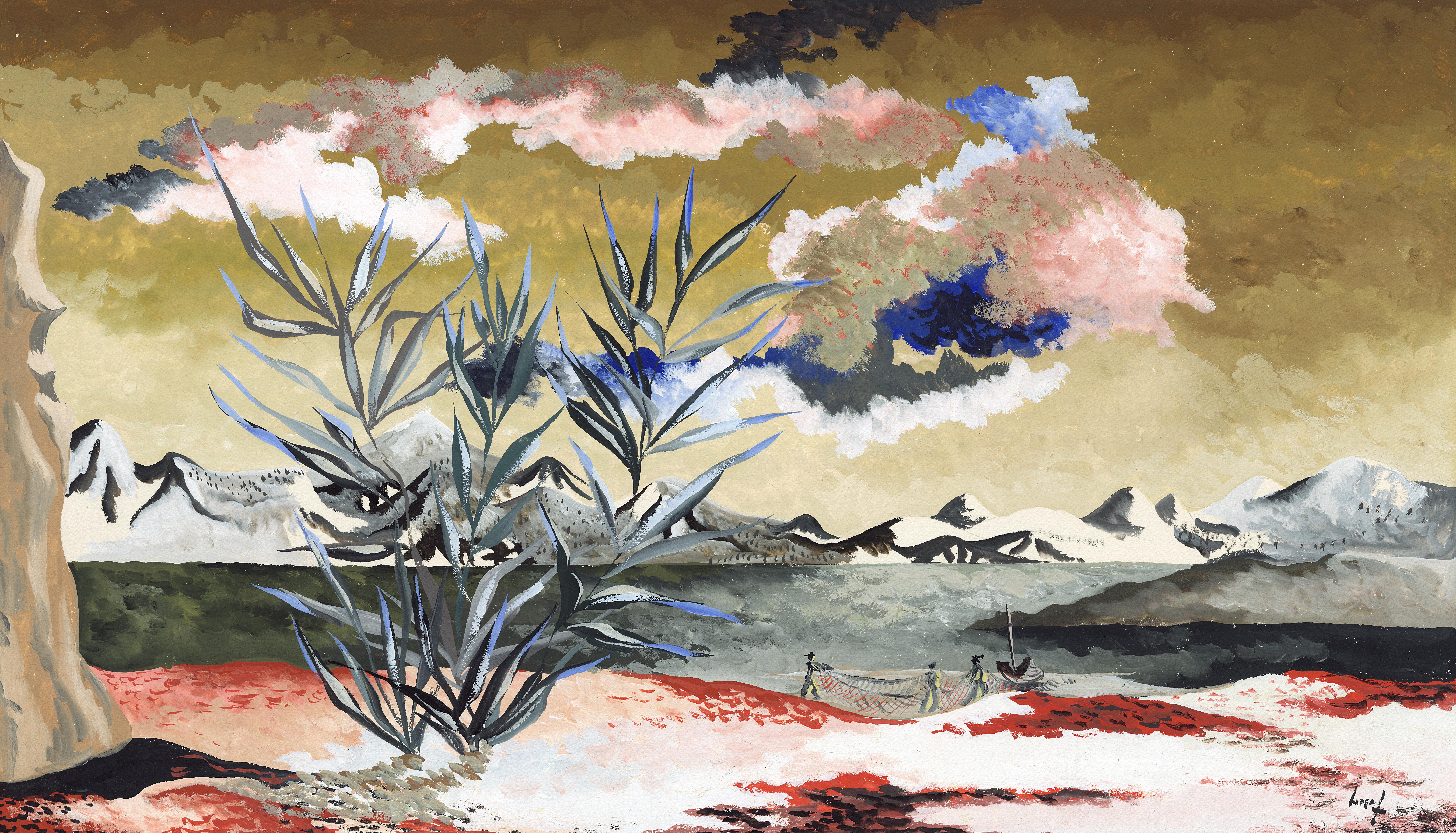 Jean Lurçat’s works are not that rare to find in public and private hands, but the present one is an exceptional gouache, and such a quality has not been seen on the market for many years. It is, moreover, in perfect freshness.

This landscape reveals the form and message of the Lurçat’s surrealism in the 1930’s. The angular, strong and assertive lines, in contrast to the chromatic palette of cobalt blue and red that the artist was particularly fond of, and which define the shadows of the composition, help to convey this mysterious atmosphere through its unrealistic light. Onwards 1928, Lurçat’s landscapes became more desert-like, and their fantastic character was intensified in 1935 by this subtle mix of realistic and dreamlike nature, of which only vegetation petrified by these straight lines, evokes a feeling of solitude in a desert crushed by a sky torn between hot and cold shades. This nature, reflected in its desolate staging, is also found in Paysage au coucher du soleil (1935), Fleurs (1935), and Fleurs et mer grise (1935), all in private collections . In each of these compositions, the human figure is present but deliberately reduced in size, as if to express his spiritual quest in the crossing of the desert.

Settled in Vevey, Switzerland in 1931, Jean Lurçat was certainly inspired by the surrounding mountains and identified them as a link between earth and sky in the background of his compositions. This artistic impulse, centred on the human being who evolves in this devastated mirage coloured by flowers, perfectly translates the complex and intellectual universe of Jean Lurçat. As a prolific artist, his talent was expressed in several fields, from painting to ceramics and tapestry to which he gave a new life in the 20th century by revolutionizing techniques and aesthetics. Each of these fields of experimentation is marked by the message of hope that Jean Lurçat kept as his primary inspiration throughout his career, and which finds its apogee in his last great woven work, illustrating this evolutionary pattern of destruction to return to life, Le chant du Monde begun in 1957 and preserved in the Musée Jean-Lurçat et de la Tapisserie contemporaine in Angers.