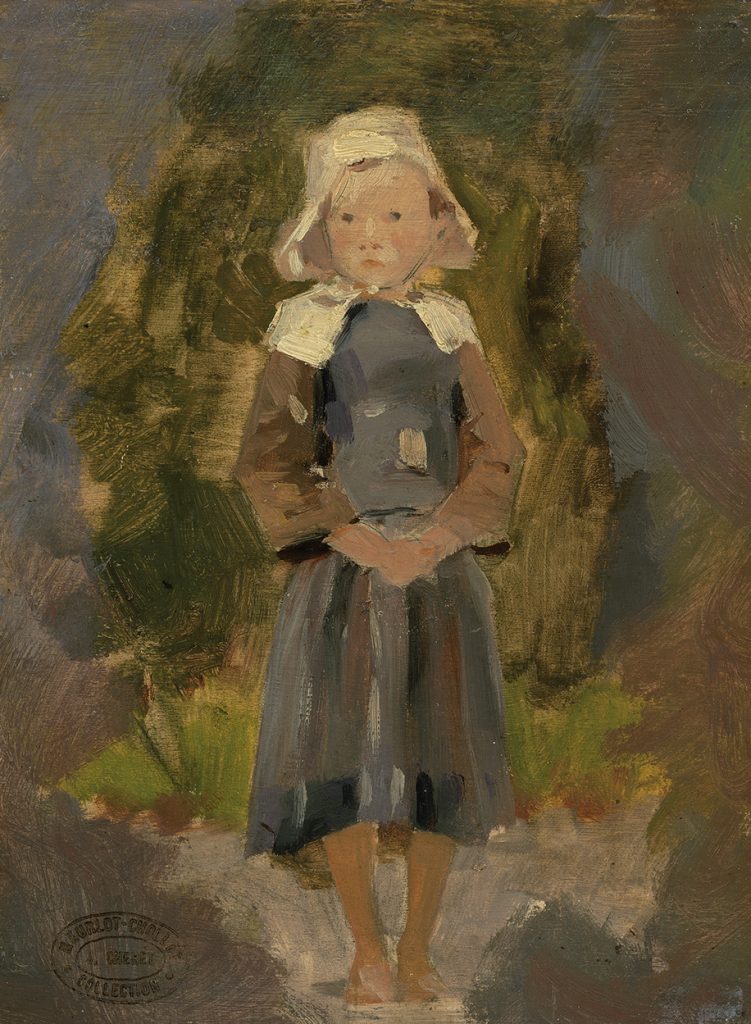 A ground-breaking figure in the history of advertising, Jules Chéret, dubbed ‘Watteau de la Rue’, was world famous for his flamboyant poster art, which decorated the Parisian streetscape during the second half of the 19th century. In contrast with his colourful, dancing nymphs that covered posters, spectacle announcements, book covers, and advertisements, this small painting demonstrates a modest virtuosity by the artist’s hand. Recipient of great success and diverse commissions by patrons, such as Baron (Joseph) Vitta and Maurice Fenaille, Chéret gradually retired from managing the press as art director and dedicated his time to paintings, frescoes and decorative arts.

Charmed by the Atlantic coast, Chéret built his new home in L’Harcouest in Brittany in 1906, where he was his own architect, decorator and landscape artist. Away from the Parisian bustle, the peace of mind together with the nearby rough but untouched nature produced realist, toned-down paintings of the Breton people and their natural surroundings, such as Paysage de Bretagne (priv. coll.), and of course this small and fine panel Petite fille bretonne. The use of an earthy colour palette, the swift brushstroke and the reduction of details render an atmosphere unseen in Chéret’s frivolous work. The girl, modest in demeanour and attire, was given the same attention and devotion as Chéret did for the Parisian ladies. Unusual in the artist’s oeuvre, Petite fille bretonne is a highly remarkable work of art of his Brittany period.

It is worth mentioning the distinguished provenance, Eugénie Meurlot-Chollet. She was a painter at the beginning of the 20th century, close friend of Sarah Bernhardt, and famously known with the latter as the best ambassador of Lalique’s jewellery.