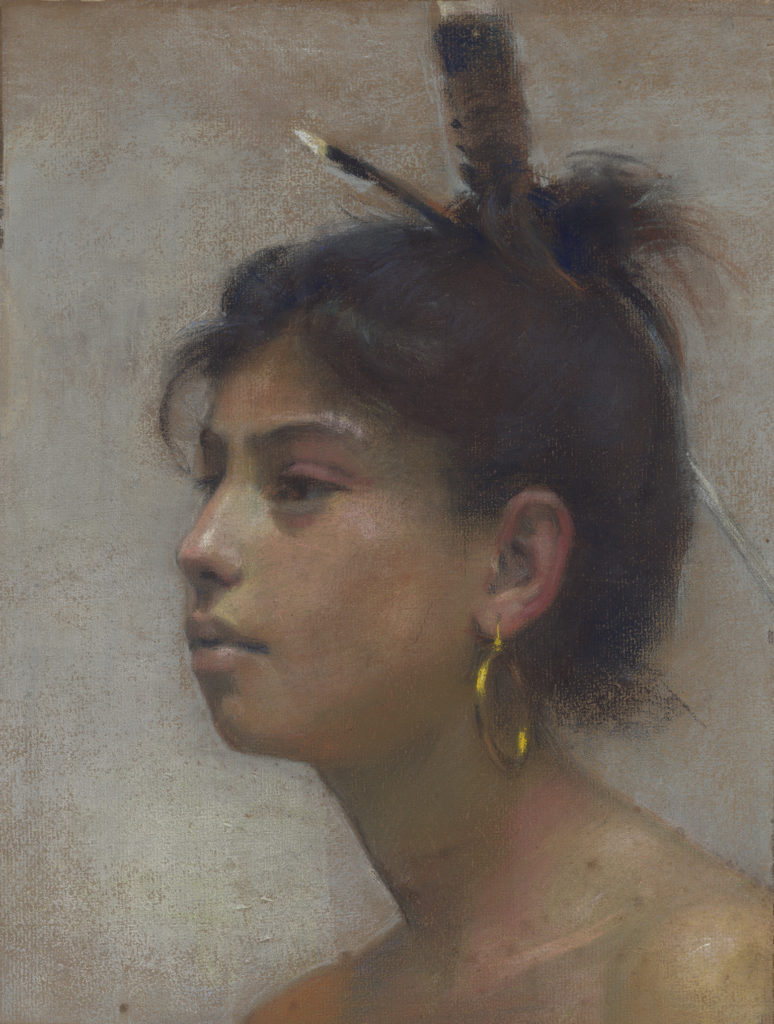 This beautiful pastel of a young Amerindian girl has been made in 1892 by Marie-Thérèse Duchateau, sometimes called only Thérèse, according to the inscription found on the support back. Born in the city of Tours, she studied at the Académie Julian as Tony-Robert Fleury’s and Flameng’s pupil. She exhibited many women’s portraits and pastels at the Salon des Artistes Français between 1891 and 1900. As she exhibited only under her family name, her works are often confused and wrongly associated to the name of a Theodore Duchâteau.

It seems that the present model was used at the Académie Julian, in the class of women. There is a late 19th century photograph taken by Alfred Machin, at an unknow date, showing the class, and on the background, hung on the wall, two works with the same model, and of the same profile.

At the end of the 19th century, subjects inspired by the American imaginary were very appreciated, especially after the Exposition Universelle of 1889 in Paris. After two years of success in London, the spectacle Buffalo Bill’s Wild West was presented in Paris for the international event. The show was very popular and attracted many artists such as Rosa Bonheur who made a famous portrait of William Frederick Cody, best known as Buffalo Bill, riding his horse (1889, Buffalo Bill Center of the West, Cody, Wyoming). Maximilien Luce and Edward Munch have also experienced the glamour of this spectacle. Among the numerous actors and horse riders staged by Cody where many Indians. Accompanying the success of the event, a lot of publications and engravings representing the Indians and their way of life were produced at the same time and contributed to the fame of the subject.

The artist has drawn the face in a very delicate manner, focusing on the long neck and round shoulders of the model. Her features are underlined with different shades of white, green and pink, giving a great intensity to the work. Her hair is pulled back and adorned with feathers, revealing large golden earrings. Her attributes and a similar attitude can be found in a sculpture made by the French sculptor known as Duchoiseuil (or Duchoiselle), Indienne sur sa pirogue et pêchant (ca. 1860) . In this sculpture, the pose of the Indian woman has the same grace.