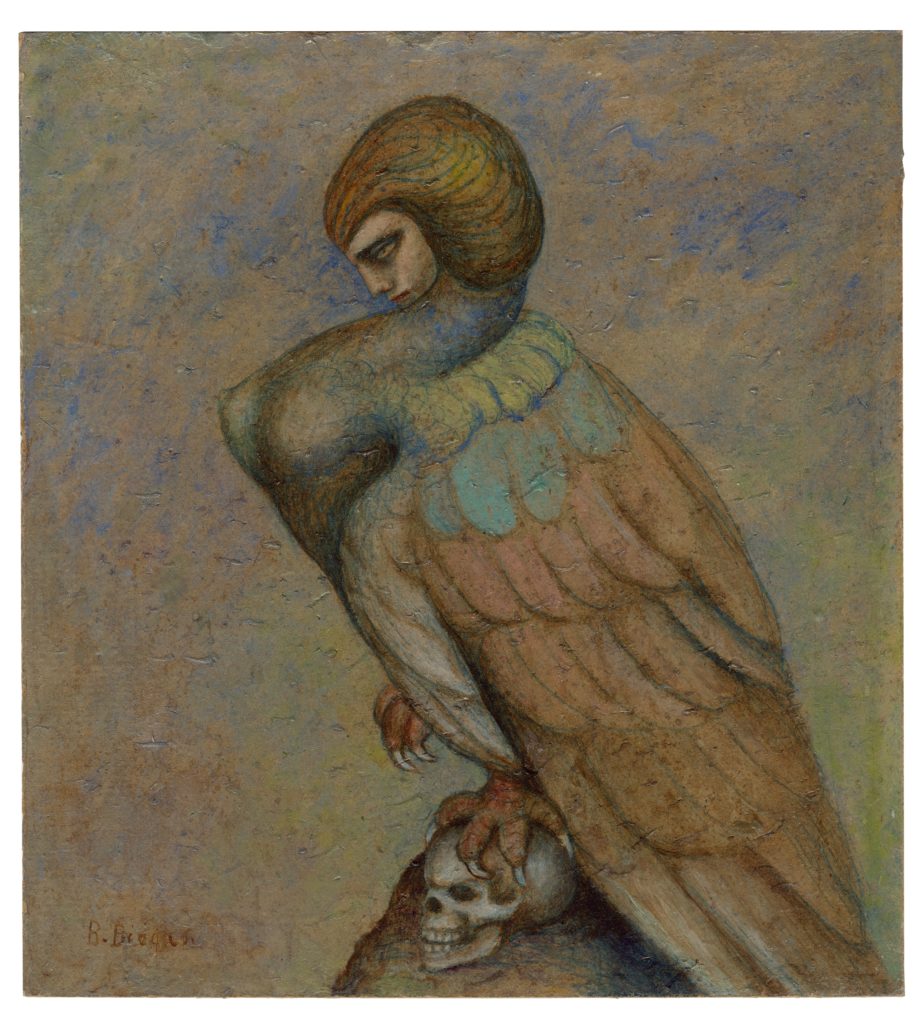 “[…] From this, on the surface of the innocent globe, arise the divergences and quarrels of the rebellious spirit. This spirit has procreated the vampiric revolt: this revolt is the war of insatiable rapacity […]” . So began the exhibition held in 1918 in the palace of Count Nicolas Potocki in Paris, which showed a large portion of the Biegas’s series devoted to vampires of war. This show was set by Polish painters and sculptors in Paris, in order to support the disabled soldiers of the Polish Army still based in France. The term evoking the bird of prey is precisely adapted to this vampire with clawed legs resting on a skull, the bust of which alone refers to the female anatomy and confuses by its aesthetic paradox. The bright colours of the plumage contrast with the creature’s fixed, hypnotic and bewitching gaze, as well as with the sinister skull. The vampire takes the form of a sphinx, echoing the myth of Oedipus and the Sphinx, as if to personify the enigma of death in anguish. Through this subtle balance, the artist composes a lyrical poetry of macabre beauty; the image of this nightmarish chimera inevitably recalls the medieval apocalyptic bestiary.

Trained at the École des Beaux-Arts of Krakow between 1897 and 1901, Biegas then moved to Paris in 1902 and evolved in the spirit and effervescence of Symbolism. The aesthetic and literary principles of this movement were in keeping with the contemplative and dark temperament of the artist, who was struck by the death of his parents and brother at a very young age. The announcement of the First World War awakened in him a political creative power, which testified to the full extent of his talent as well as his personal opinions. First a sculptor but unable to model, the artist turned to the theatre in 1914 and composed the play entitled “Les Mystères de la Guerre”, which marks the frightening appearance of the vampire. From this theatrical basis, Biegas produced a series of forty-three items, composed between 1915 and 1917. Most of them were inherited by the sole legatee of the artist, the Société Historique et Littéraire Polonaise, in Paris, which sold a part of it during the 1960’s and 70’s, including the present work, to the Galerie Jan Krugier (Geneva) and the Brook Street Gallery (London).

This sensual and morbid imaginary, composed of harpies, dragons and anthropomorphic figures that attack their prey deformed by pain, evokes the atrocities of war, both the victims and the brutality of the human soul perverted by the conflict and transformed into demonic creatures. This commitment draws its strength from the symbolist vocabulary, impregnated with the image of the femme fatale, mysterious and dangerous, but the artist was able to adapt his art to the contemporary symbol of war, while developing a personal dreamlike universe, the artistic mastery of which was praised by Gustave Kahn in January 1919: “[…] there is a philosophical materialisation of the instincts of perversity, of the different faces of human misfortune, a personification of the forces of evil evoked in the chimera, by means of monsters, and it is of a surprising intensity […] It is not seductive, but the impression is strong. It would not be possible for a second-rate artist to escape into the chimera in this way” .