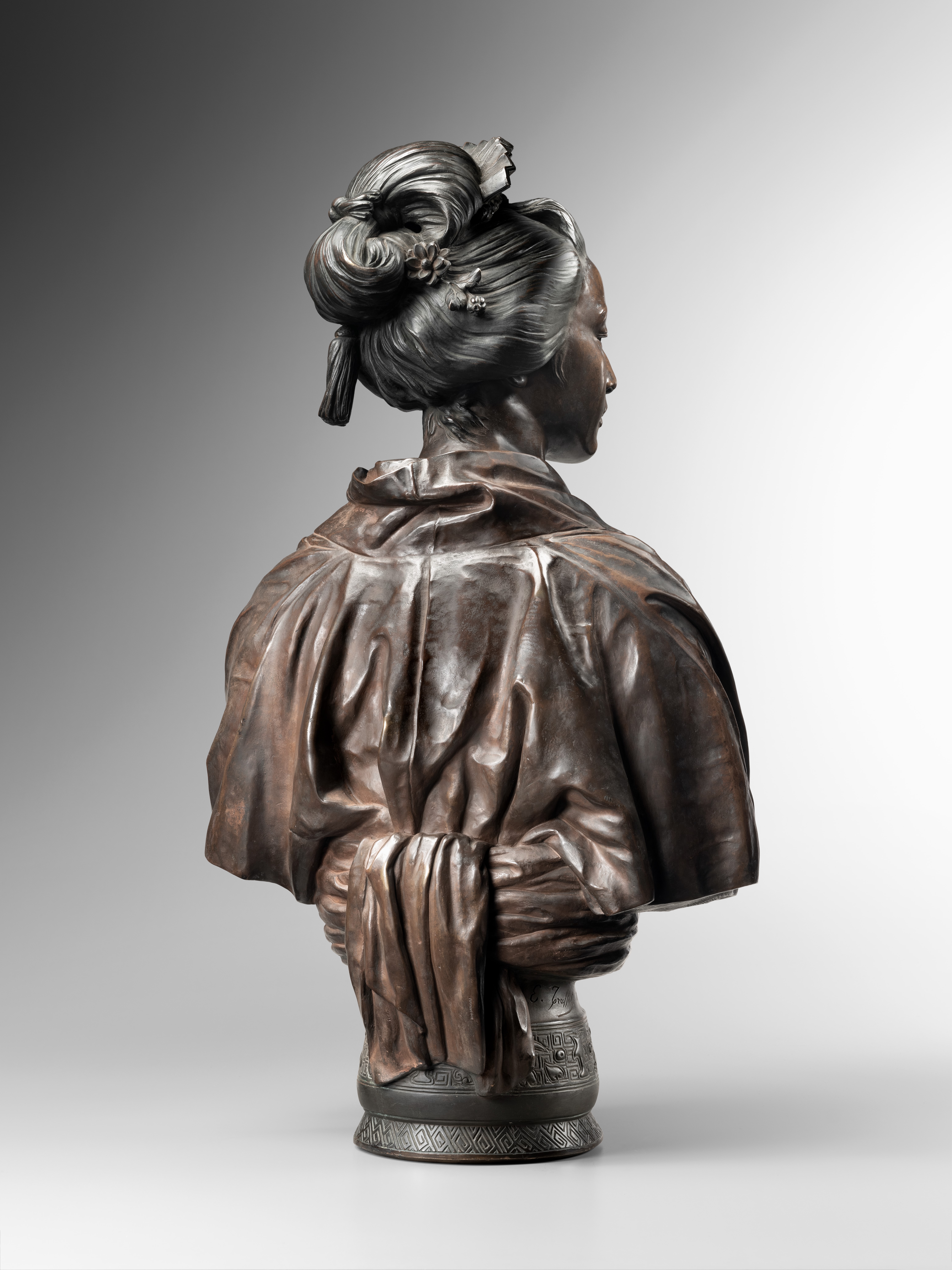 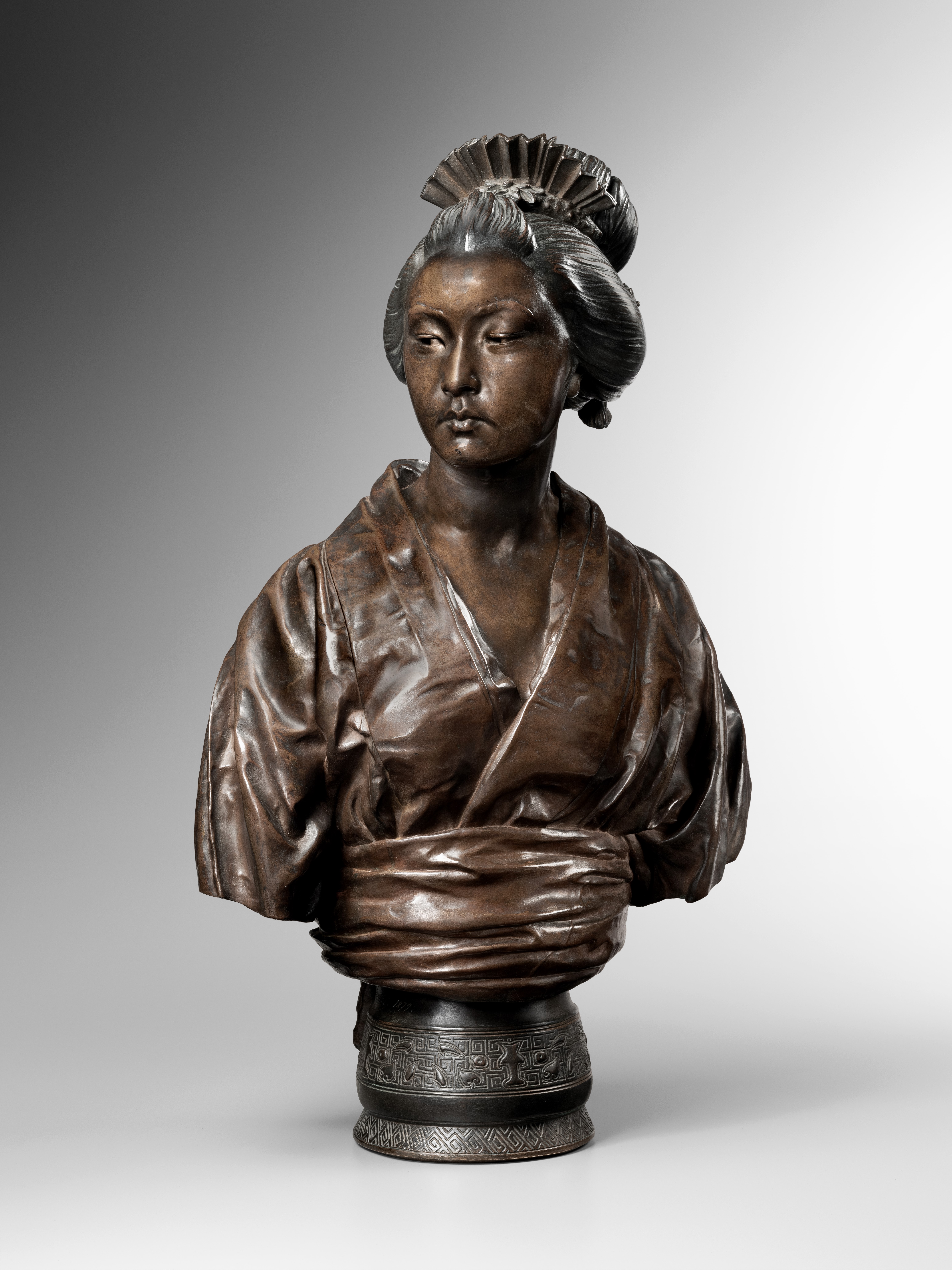 This is an exceptional bronze and representation of a typical Japanese woman by Emile-Louis Truffot, when he arrived at the peak of his career. The second half of the 19th century was scientific and marked by a growing interest in distant peoples and civilizations, no longer in a fanciful and imaginary relationship, but in the light of scientific journeys in which artists sometimes took part. Charles Cordier produced a series of so-called “ethnographic” portraits for the Museum of Natural History in Paris. Carpeaux was interested in these faces whose beauty overturned the traditional canons: Chinese, African, occupied him while he was working on the Fontaine des Quatre-Parties-du-Monde. The 1878 Universal Exhibition in Paris highlighted Japanese civilization, the traditional, intellectual, and industrial productions of which were presented in a pavilion on the Champs de Mars, combining simplicity and refinement, and in a farm in the Trocadero gardens. The following year, Truffot took part in this craze with Yoki, the Japanese woman, showing first a plaster at the Salon (no. 5391). The year later, the model reappeared but in a bronze cast and belonging to Raingo Frères (no. 6709).

Her face is slightly turned to the right, her gaze avoids ours, and she seems to focus on something we are missing. Dressed in a simple kimono, she wears the geisha hairstyle, a flat chignon called Tsubushi. Guardians of Japanese traditions, these women practice all kinds of arts with excellence. In this sculpture, everything is done to evoke delicacy and sophistication: the details of the hair wrapped around a comb with floral motifs from which a ribbon escapes, the garment with its heavy drapery skilfully knotted whose folds contrast with the smooth skin. The base on which is placed this bust with its geometric Japanese decoration, the green colour of which itself refers to the precious jade of ritual objects. This young woman is not a stereotype: she has a first name, Yoki, which distinguishes her and gives her own identity. Her face bears witness to her character. Her captivating charm comes from the truth that emanates from her.

Apart from those in the Salon, there are only a very few known examples of the bust of Yoki, the Japanese, A terracotta example was donated in 1890 by Alphonse de Rothschild to the Musée Anne de Beaujeu (Moulins), but it seems to have been lost. The present copy bears a Tiffany & Co stamp, and it was most probably casted by Raingo Frères in Paris, to honour a special order from Tiffany in New York. The luxury shop on the 5th Avenue indeed offered “Artistic Bronzes” on the second floor, “all the best production of art-workers in bronze. […] This floor has more the appearance of an art museum than a salesroom”. We know of models by Carrier-Belleuse and also by Georges van der Straeten and Emmanuel Villanis, representatives of the Art Nouveau style. Some of these sculptures were, as here, much large, breaking with the purely decorative character .