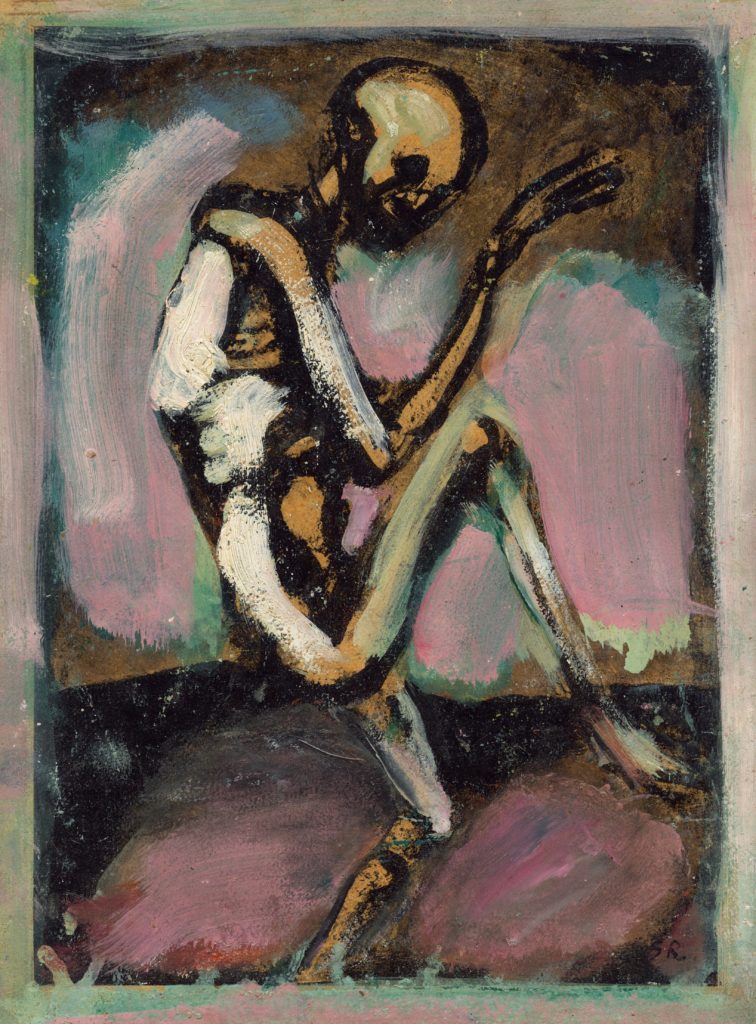 This is a wonderful piece of Georges Rouault’s series dedicated to the illustration of the Fleurs du Mal by Charles Baudelaire. The Squelette was originally one of the fourteen black and white aquatints printed in 1927 to be published by Ambroise Vollard. But the project was never finished, and it is only in 1966, after the artist’s death, that the book came out. Rouault obviously received a few copies of the prints in 1926, and he must have painted a few copies by hand with oil, such like Danse Macabre I. It is now considered as a painting, in the catalogue raisonné of Bernard and Isabelle Rouault Dorival. The palette here is restricted but powerful: strong black and white, pink, green and ochre. In the 1930’s, the artist published books with prints with a similar brunch of colors. However, the gorgeous pink, which contrasts here with the green and grey of the composition, has been rarely used elsewhere by the artist.

Close to the Fauves – Rouault studied at the Académie des Beaux-Arts, pupil of Gustave Moreau, with Matisse and exhibited with the group at the Salon d’Automne in 1905 – the artist emphasized his subjects with expressionist colors and features. Furthermore, Rouault had been an apprentice in a glazier’s studio, from 1885 to 1890. This experience made him familiar with the medieval art of stained-glass windows, which had a significant impact on his aesthetic style. In the present Danse Macabre, this influence of gothic art is visible, with the large and expressive black outlines, and the transparent colors, adding some expressivity and dynamism to the skeleton movement.