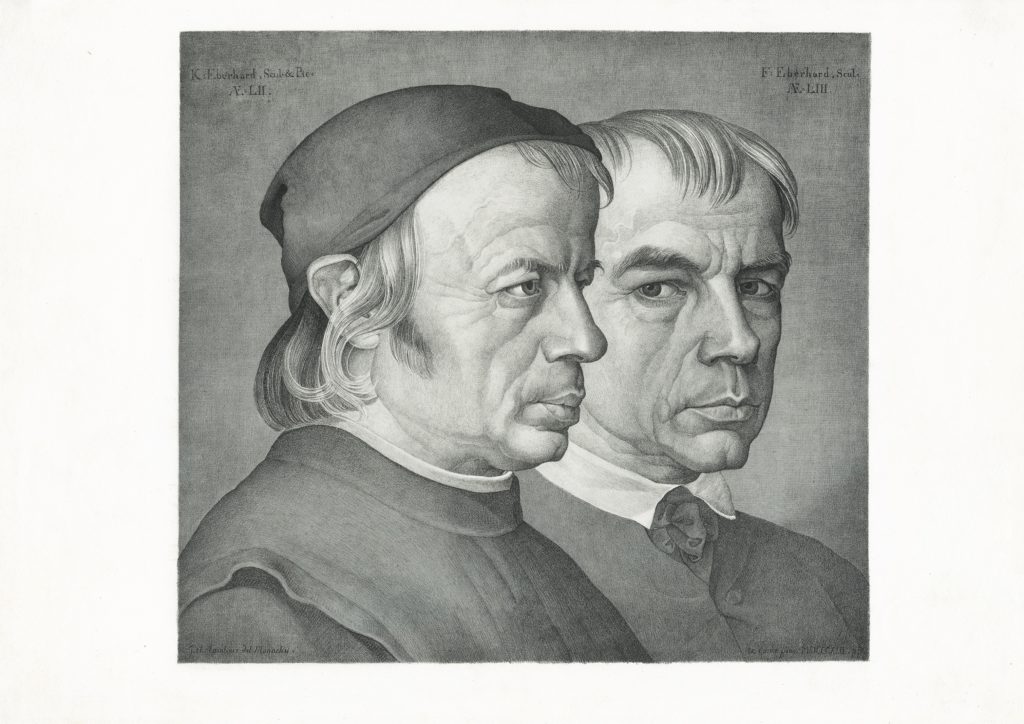 The Double Portrait of the Painter Konrad Eberhard and his Brother Franz is one of the most significant friendships of German Romanticism and Nazarenes. Artistically and technically, Johann Anton Ramboux’s Double Portrait has been described as masterpiece and one of the great accomplishments of the early stage of the lithography.

The present sheet is one of the most beautiful impressions we have ever seen. The chalk lithograph is perfectly fresh and contrasted, with strong pressure, all the nuances finely emphasized and with graduated tonal tones. The fine texture of the paper perfectly displays Ramboux exquisite handling of the medium, evoking the sheen of a silverpoint drawing. It is a masterly tour-de-force.

The Double Portrait of the Painter Konrad Eberhard and his Brother Franz was printed in a very small number of impressions, probably for the Eberhards themselves to distribute amongst friends. The approach of the Munich based printer Johann Anton Selb appears to have been experimental, and there was no standard edition. Some impressions were printed with an additional tint tone (brown) on wove paper, other on China paper. As far as we know, there are 17 impressions in public collections. In 1975 Winkler recorded nine examples in German museums. Another one was at the Art Institute of Chicago and since then a further seven have entered museum collections. Remaining impressions in private hands are of the utmost rarity.

Formerly a pupil of Jean-Louis David in Paris, Ramboux spent the years between 1816 and 1822 in Rome, where he became acquainted with the sculptor and painter Konrad Eberhard and his brother Franz, who also worked as a sculptor, in the circle of the Nazarenes (a circle of German artists who rejected neo-classicism and extolled a return to religious painting inspired by the art of the Middle Ages and early Renaissance). The genre of the double portrait, or Freundschaftsbild, was an important subject for this group of artists, who held an idealised view of friendship as integral to the life of the artist, associating it with medieval guilds and confraternities.  Still in Rome, Ramboux made a small double portrait of these two brothers on oil, which is now at the Wallraf-Richartz Museum in Cologne. At the same time, the lithograph was created, to the same scale. Then, together, Ramboux and the Eberhard brothers left the city in 1822 and moved north. Having arrived in Munich, Johann Anton Selb got a very small edition of it (see below).