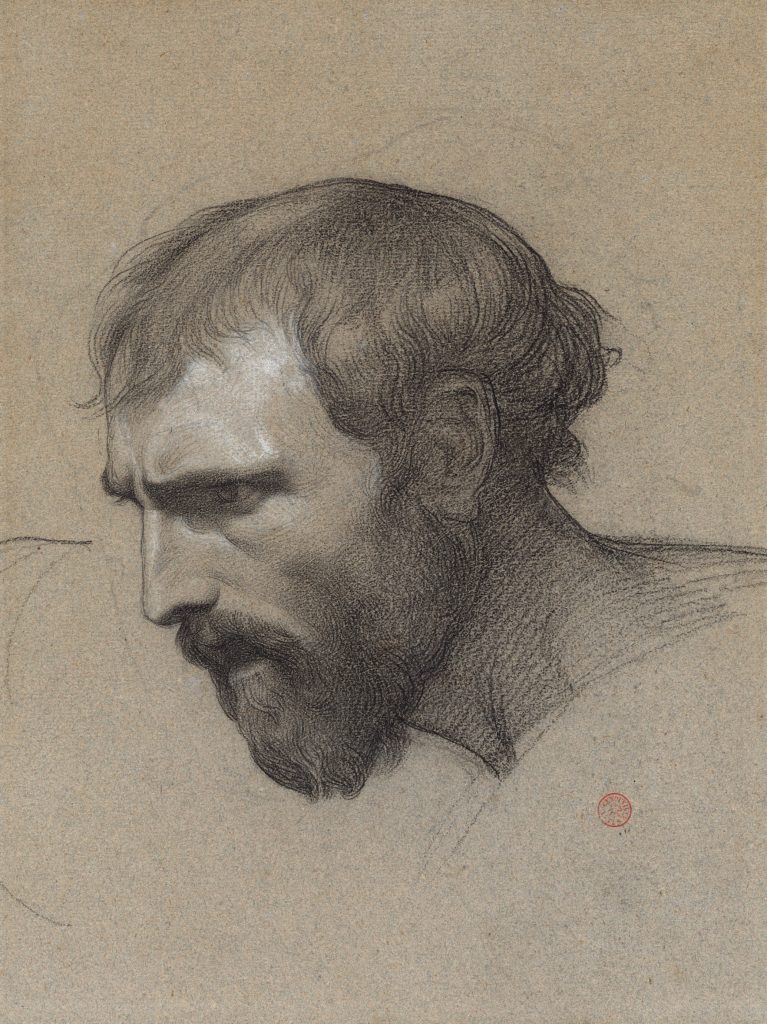 The present sheet is a stunning preliminary study related to Léon Bénouville ‘s master painting, Les Martyrs conduits au supplice; now at the Louvre (inv. 20042). The artist started this project when he was still at the Villa Medicis, in Rome, between 1846 and 1851. This portrait of a man is precisely one of the preparatory studies for the figure of an executioner, who can be recognized in the final painting as mingled with the Christians, wearing a animal skin on his head and pushing brutally forward a woman on her head. Back in Paris, Bénouville exhibited a watercolour sketch in 1852 at the Salon the following year under number 82 and that won him a second medal. The critics were unanimous in recognising both the mastery of execution and the scale of the project, including Alphonse Grun, who commended it: “[…] the beautiful sketch of the Christian Martyrs led to the torture in a Roman circus, it is to be hoped that M. Bénouville will make a painting of it in all the conditions of great history painting”. This painting was officially commissioned by the State in 1854 and presented at the Salon in 1855, a work for which Bénouville also won another medal.

This portrait is a testimony of the creative process, which finally led to the painting. Originally close to a Nicolas Poussin for instance, Bénouville’s realism here undoubtedly brings him closer to the artistic preoccupations of Gustave Courbet and situates his art between Classicism and modernity, renewing the academic movement of the 19th century with his own style. At the sale of the artist’s studio on May 3, 1859, at the Hôtel Drouot, the catalogue mentioned under no. 87 “Studies for his painting of the Martyrs”, of which this portrait could be part. The importance of this artist’s talent, and more particularly the quality of his drawings, have been underlined by Philippe Burty in 1859: “The drawings were relatively much more expensive than the paintings; indeed, they were for the most part superior to them, both in terms of inspiration and effect”.

Through the precision and sharpness of the drawing, this portrait of a profile man perfectly translates all of Léon Bénouville’s talent for transcribing the emotion of a subject, in the particular care given to the details and the mastery of the light and shade that give this face all its strength, underlined by the intensity of the gaze. This right mixture of energy, tension and dignity in the pose, translates the conscientious and meticulous work of the artist that the art critic Philippe Burty again analysed in 1859: “He searched for a long time […] he made and redid until he was perfectly satisfied with sketches in small proportions of the composition he was looking for” .