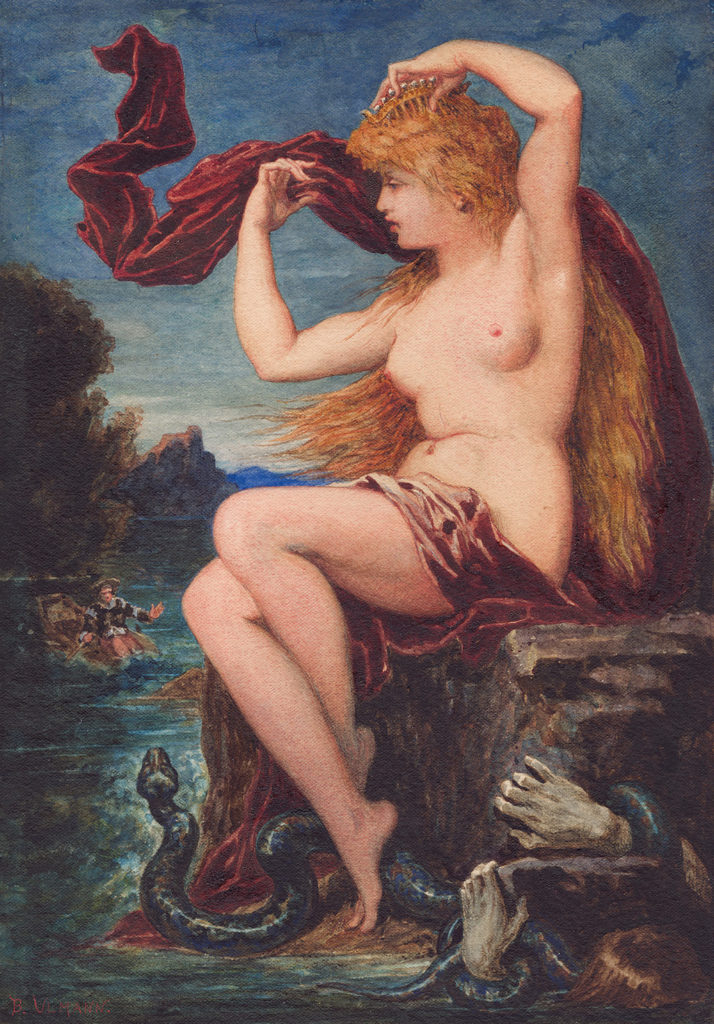 This beautiful watercolor by Benjamin Ulmann, still in pristine condition, is a smaller version of a large oil on canvas (154x89cm) that the artist had just made in 1878 and was bought by the French State at the Salon for the Musée Guéret. At this time, Benjamin Ulmann was an acclaimed and institutionalized painter: he had been awarded the Prix de Rome in 1859 and had received official commissions for the decoration of the Palais Royal and the Palais de Justice in Paris.

Due to the successful welcome of the oil, Ulmann probably made the present watercolor between 1878 and 1880, and he exhibited it at the Salon in Paris (1880) and Mulhouse (1883), a year before his death. It is focused on the nude figure of Lorelei, a legendary woman whose beauty and singing seduced and killed sailors passing by her rock along the Rhine. The name of Lorelei refers both to this imaginary figure and to a real rock on the right bank of the river, known of its dangerousness. The Ulmann’s depiction was inspired by Heinrich Heine’s poetic interpretation of the legend: Die Lorelei, published in 1824.

This Germanic legend actually came from the poet Clemens Brentano (1778-1842) but it is the work of Heine that made it famous. At the time, there was no preceding representation of it in France, and only a few in Germany, among them one by Ludwig Thiersch in 1860 (Aachen, Suermondt-Ludwig-Museum) and one by Eduard Jakob von Steinle in 1864 (Munich, Schackgalerie). The two canvas are very different from the present composition: Lorelei is siting on a very high cliff, as a representation of the Greek poetess Sapho. Here Lorelei is represented seated on a small rock, while combing her golden hair with a golden comb, almost exactly as she is described by Heine. Behind her, a young knight on a boat, very gallantly dressed, illustrates the powers of her voice, while their consequences are evoked through the two green hands of a victim described by Heine, gripping the rock, at the foreground of the composition.

At her feet, a blue snake encircles these decaying hands, while rising his head to his mistress. Absent from the legend, the snake appears as a symbolic presence, referring to the evil nature of this woman. Women and snakes, following the traditional iconography of Eve and Lilith, were a common association in the second half of 19th century, especially in the perspective of the femme fatale. The curse seems inherent to Lorelei herself, as the fruit of a fatality and not as a deliberated trap. It is possible that Ulmann was here inspired for the type of feminine beauty redheaded by the works of his friend Jean-Jacques Henner. The Ulmann’s aesthetic bias to illustrate this story could also clearly be associated to Gustave Moreau’s imaginary. Only after 1880 a few French artists exhibited representations following Heine’s poem: Adelaïde Salles-Wagner in 1886 and Georges Picard in 1893.