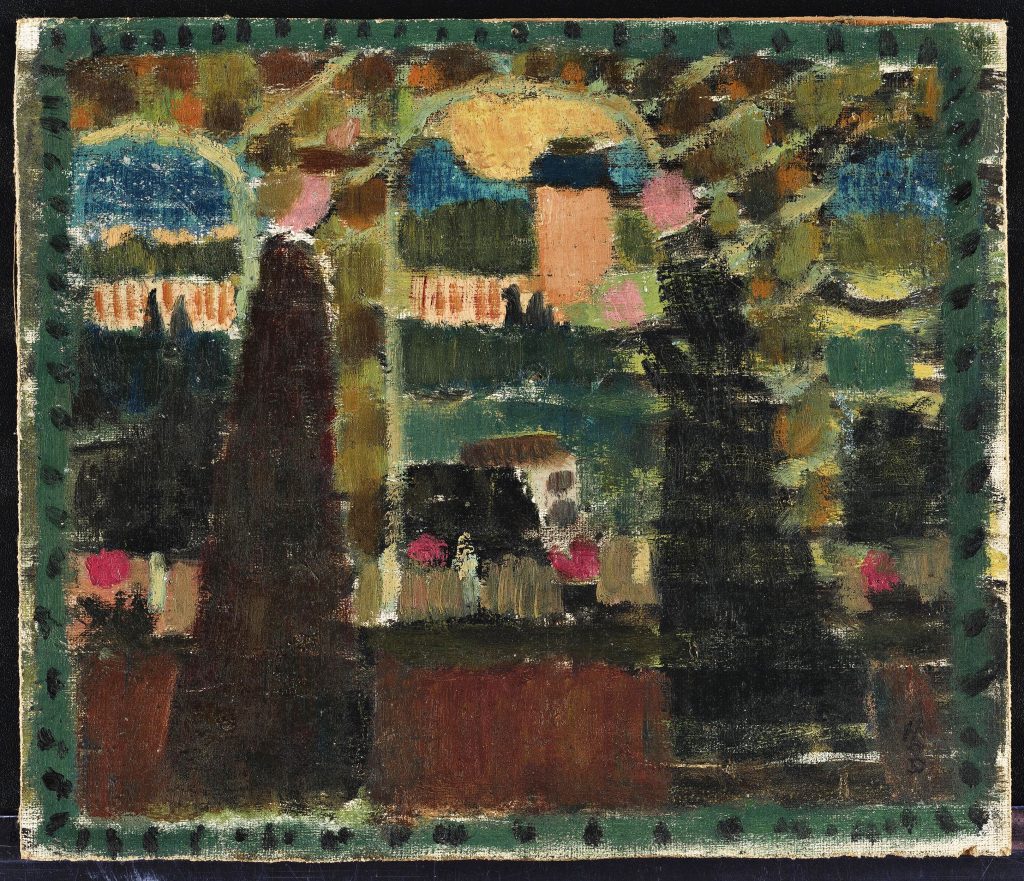 The painting is a study for one of the artist’s major works, La Visitation, and dated from 1894. Presented at the Salon de la Nationale in 1895, it was acquired a few years later by Sergueï Chtchoukine, a famous collector of Matisse and Picasso, and is now kept in the collection of the Hermitage Museum in Saint-Petersburg. Through a religious scene, Denis evoked a moment of his private life, his pregnant wife, Marthe, as the Virgin Mary visiting her pregnant cousin, Elisabeth. The artist married Marthe Meurier a year before, in 1893. The background represents the landscape around their own house, the Villa Montrouge, at Saint-Germain-en-Laye where the couple established itself in July 1893.

The charming present work offers a first vision of Denis’s project: Mary, on the left is still wearing a hat, while Elisabeth on the left already hold her hands in prayer. Both monumental and dark silhouettes create a strong contrast with the colorful background. Isolated on a terrace, the two women are separated by a central arch, creating an opening towards the landscape. If the arches, the trellis with ivy leaves and the overall composition are similar to the final work, there are some difference in the background. In our composition, across the arches, a blue and sunny sky overlooks a church, a forest and the usual hills and houses’ silhouettes typical of Villa Montrouge’s surroundings. This bright and lively horizon is more powerfully expressed than with the soft atmosphere composed with paler colours for the final version. The technique used by Denis with dynamic and large touches, evoking a fluid pointillism and a strong Nabis style, also creates a vigorous image. The colour palette, the simplicity of the figures, and the almost abstract landscape, make think of early works by Kandinsky around 1909, before his Blaue Reiter period.

Intriguing and playful, our Visitation illustrates how Maurice Denis used to imagine his work, to situate the scene, to compose and to create a complete atmosphere with a few touches of colours. In a freer and liberating expression, the artist represents here one of his favourite subject: women spending time together. Marthe, and her sister Eva, inhabit Denis’s oeuvre, incarnating saints, mothers, and nuns while creating a current connexion between Denis’s works and his intimate circle.